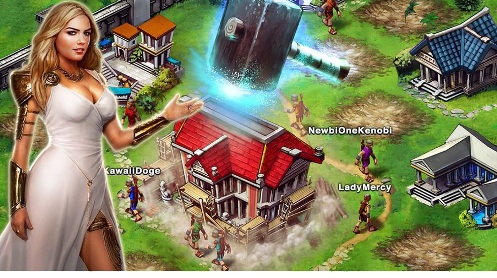 Few things have swung both the mobile gaming market as Game of War: Fire Age. The free strategy game to play, runs on any iOS or Android device and was created by the developer of Machine Zone.

Game of War has no quality that stands out from other games of the same style, maintaining a very similar pattern and a traditional system of micro-transactions. But three months ago, the developer began running on TV a totally epic commercial for the game, featuring none other than the beautiful model Kate Upton. Check out the video:

Curiosities and the impressive numbers begin with the amount spent by the developer under the trade: 40 million dollars! As a comparison, Gearbox Software has spent around 35 million in total to the development and dissemination of Borderlands 2. As a developer of small businesses can afford all of this? Quite simply, Game of War is generating more than $1 million per day in micro-transactions and remains at the top of the most lucrative apps from the App Store and Google Play to more than six months (only behind Clash of Clans and Candy Crush Saga).

As it is to imagine, this type of game has a very large fluctuation of players, every day millions of people install the game and millions of others stop to play, but the Machine Zone has managed to keep more than 2 million players (who buy actively in the virtual game store) on average per day and the developer is already being valued by investors in more than $3 billion. Another curiosity is that recently a boy in Belgium has spent more than $50,000 with transactions in the game, using the parent’s credit card.

Tags: Game of War with the beautiful Kate Upton

Previous: About Running Fred Game
Next: Pillars of Eternity gets release date and arrives at the end of March