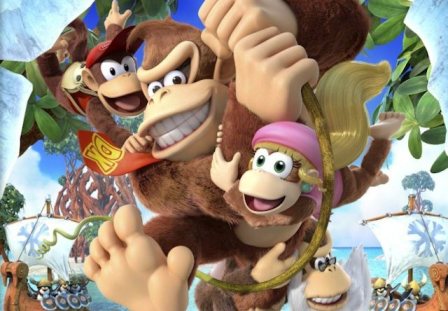 The character Cranky Kong, who has participated in previous games in the series as a playable character, seems to be back on the Wii U video game Donkey Kong Country: Tropical Freeze, it is rumored for image that launched Amazon.

Do it only rumors?
Perhaps the most fans of the series Donky Kong, seeing the image of his new game for the Wii U console, Donkey Kong Country: Tropical Freeze, they missed the presence of figure of the grandfather gorilla, Cranky Kong. And it is that on the cover of this game featured the protagonist, Donkey Kong, Diddy Kong and Dixie Kong.

And it seems to be yes Cranky appear in Donkey Kong Country: Tropical Freeze, as Amazon Italy has updated the record of this new game with another cover of this in which the grandfather of the family itself that appeared, but Nintendo has not said nothing of this possible occurrence, perhaps because it can be keeping some kind of surprise associated with this character and with gameplay.

A highly anticipated game
Donkey Kong Country: Tropical Freeze is one of the most anticipated games for the latest console from Nintendo. You will need a high resolution graphics that will accompany with the use of different graphics of the camera. If we follow this saga in line with previous games if we will have a highly amusing title, in which both ourselves and multiplayer will enjoy hours of entertainment and fun. But we’ll have to wait until early next year 2014 is expected to enjoy and hopefully very funny, new Donkey Kong adventure.

Previous: Virtua Fighter turns 20 and invites us to remember
Next: Digimon story will be released for PS Vita