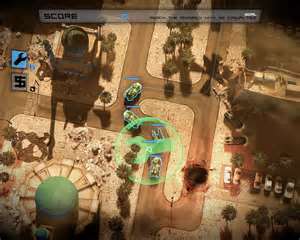 Anomaly: Warzone Earth is an interesting game of action and strategy based on battles against aliens and responding perfectly into the new and powerful Sony PlayStation3.

The title premiered some time on PC and its success has enabled to be present on all platforms on the market today.

Tower Defense
And the fact is that we are faced with one of the best strategy games based on the classic tower defense games. Set in the cities of Baghdad and Tokyo, Anomaly puts us in the skin of a super soldier entrusted to look over the safety of the military convoy that must fulfill each and every one of the missions of the game.

This armoured group is composed of all units specialized in defensive and offensive work being required the player to combine them to achieve the objectives. We also have the option of investing the money obtained by adding new troops to the convoy, or improving battle that we have to increase its effectiveness.

Control system
The control system is really simple and allows you to handle the scene in an agile manner, what we will come in very handy since it will become increasingly broad scenarios where fighting is taking place and there will be a greater number of enemies.

The requirement of the game is a fast-paced action that must be handled with a great deal of strategy if we want to move forward and achieve the objectives, presenting progressive and entertaining levels of difficulty.