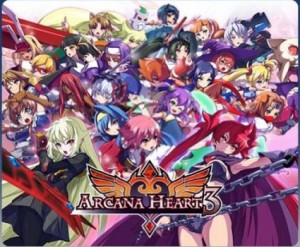 In this third installment of the title will include two new characters that join the score already available in the two preceding chapters, including significant improvements in its combat mechanics. This is a deeper degree than previous but perhaps not enough to be considered one of the greats.

Fights and battles
After the events that took place in Arcana Hearts 2, a wealthy family tries to restore peace in the world in pursuit of offering all kinds of technological advances, among which include vital improvements for those affected by the Kanto Incident. However, it was soon discovers the real interest: dominate the overall situation, which triggers a conflict that will be turned out on the basis of struggles between the characters.

A fine design
The story is very important the role of the young female protagonists who bear the weight of the missions and fighting. The manga style of them is extremely well cared for; the movements are spectacular and not leave anyone indifferent.

The proper design of scenarios and the variety of characters confirms the good work of its creators. With regard to sound, it should be noted the presence of unique and exclusive Japanese voices to narrate the dialogs and the history.

Previous: Harvest Moon reappears with a more simple
Next: Anno 2070: Strategy game to save the world