The producer WB Games announced that Batman: Arkham Knight will arrive on June 2, 2015 for the PlayStation 4, Xbox One and Windows PC. The game was originally scheduled to arrive later this year, but was postponed to 2015 as shown above. The long awaited game of Knights of darkness is being developed by Rocksteady, the responsible for the fantastic Arkham Asylum and Arkham City. 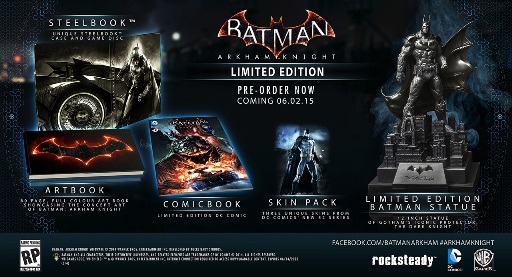 This edition features a metal case with the game, a 80-page book with art game, a special edition of the comic Arkham Knight by DC Comics, three outfits for the characters and a statue of Batman. The Limited Edition will be available for $99.99 for PlayStation 4 and Xbox One (PC and in the countries mentioned above). 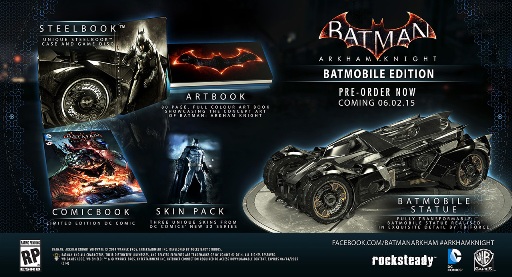 Batmobile Edition will arrive by incredible $199.99, exclusively on consoles. This includes the entire contents of the Limited Edition; the difference is due to the return of the statue of Batman for a fantastic statue of Batmobile, produced by the Triforce.