The trilogy closes brilliantly in “Batman: Arkham Origins”, which explores the early adventures of a young Bruce Wayne, inexperienced and unaware of the evil that plagues Gotham. 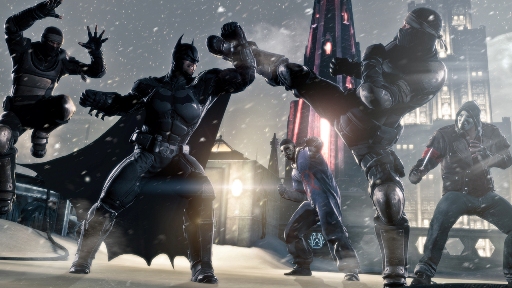 The game, available for Xbox 360, PlayStation 3 and PC, it is addictive and very entertaining. The player knows what he is facing, to a world of Arkham Arkham style, which can be a disadvantage or an advantage, depending how you look, and recreations and feelings will move to the previous installments. You may try your luck with something new would have been too risky for the developer Warner Bros. Games Montreal.

This title is a prequel to “Batman: Arkham Asylum” and “Batman: Arkham City” and shows the superhero without allies and the usual self-control. The story grabs you from the first minutes. The criminal leader of Gotham, Black Mask, has put price at the head of Batman. It will pay $ 50 million to who gets to end his life, a reward that not only will mobilize dangerous killers, also members of the elite division of SWAT, paid for that purpose, corrupted for the occasion.

The police, who considered him a vigilante, and want to capture him in this chaotic scenario, will have to maintain order in the city of Gotham. The story offers a sordid city, greatly enlarged, with new neighborhoods and look with Gothic and dark tints, but also a complex story, not linear, and full of surprises. It should be noted the dubbing. The voice of the hero is known and familiar. Claudio Serrano makes Batman in a hero with charm.

Graphically the game is sublime, although perhaps a graphics slightly improved. It is possible that one thinks that you don’t have as much definition as it should be, if we compare with other titles recently launched, but the gameplay reverts emotion and intensity. The shadows, the details of the suit and the context are well profiled. Some slowdowns unimportant on PlayStation 3 but it cannot tarnish the glory of the hero in growth. This young Batman proposing just a fun, bright, addictive adventure, with a plot, compelling and fierce, retains the essence of the trilogy but contributing the best of all of them.

The game maintains the pattern of open world made in “Arkham City”. The player will find tools and equipment to help complete the puzzles. Home party with batgarra or the explosive gel and will be adding elements such as the remote control hook. The new “Detective Mode”, in the purest style of CSI, serves even guide in case of jamming. Got this very big news. By using it you can advance or delay sequences thoroughly investigated to solve cases.

Its combat system, but fluid is not too deep in the case of the early battles, but the real enemies when they change things there. Largely depends on a combination of counter-attacks and beatings. The supervillains fall after several attempts, although the difficulty curve may be less than expected. It has inherited the system of previous installments but occasionally suffers from a lack of ideas. In short, a brilliant prequel that maintains the high standards set by the series to date.