A great surprise came from Blizzard Conference in California. The company announced its newest game, Overwatch. The game will follow the style of first-person shooter with competitive multiplayer in times and focuses on a group of heroes who have completely different playing skills and styles. The description and the official videos that you can see below, you can see that the game is very reminiscent of the style of Team Fortress. 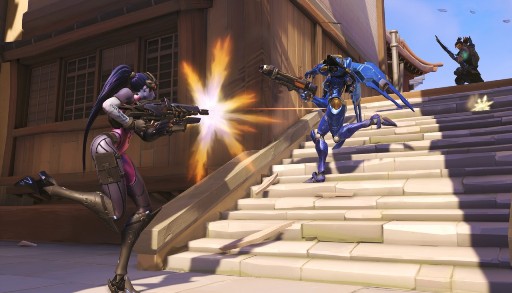 Blizzard also revealed that the game will feature 12 heroes, including a beautiful sniper (Widowmaker), a cyber monkey (Winston) and even death in person (Reaper). The game focuses on intense and constant action, something that has quite to the beginnings of shooters in first person. The fact that each hero has completely different skills, should give more dynamic to the game yet, as the gameplay changes completely.

In the press release the developer gives more details about the game world: “The Overwatch action takes place in an advanced future where an international task force made up of soldiers, scientists and adventurers, known as Overwatch, gathered to restore peace in a world collapsing in wars. After many years, the group’s influence is reduced and dispensed. The Overwatch are gone, but the world still needs heroes”.

Mike Morhaime, CEO of Blizzard completed during the announcement, “Our goal with Overwatch is to create a fantastic FPS experience that is accessible to a much larger audience, while at the same time we want to deliver the action and the depth that fans of the genre will love”. This is the first game from Blizzard in decades, which takes place in a completely different universe of their franchises Warcraft, Diablo and Stacraft. Blizzard also said during the event to create a FPS has been a project and a dream of many years of developer.

Initial reports indicate that players will face off in six matches against six in various scenarios inspired by real locations such as London, Egypt and others. More detailed information of the game and each of heroes can be seen on the official website of Overwatch, where you can also sign up for the beta arriving in March 2015.