Cognition: An Erica Reed Thriller is an interesting adventure game for PC with a very cinematic aesthetics and a story that hooked from the beginning. 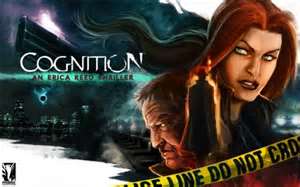 FBI agent
Since the beginning we put ourselves in the skin of Erica Reed, an agent of the FBI responsible for cases of serial murders. We are in a cemetery chasing a murderer, the author of “crimes of Cain”, with the peculiarity of which it kidnaps one, trying that other saves it.

Our hero has a special gift to solve cases, which are none other than cognitive powers. It is capable of viewing what has happened through objects and may even influence in the past and in the future, as if it were a seer. Erica is accompanied by John, his assistant.

Puzzles to solve
In the first chapter we will have more than 8 hours of entertainment from a crime happening in Boston. Multitude of puzzles solved in tracks that should lead us to the resolution of the mystery which go together.

At graphical level the game is well resolved and the soundtrack and sound effects to accompany the perfection.

The adventure is completely in English with a good job in the voices, although there are some secondary characters who should have worked better or simply do without them. The strength of the game is in our FBI agent, while the secondary stories can be improved.