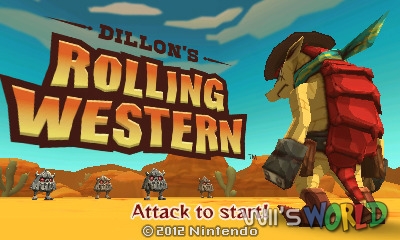 Dillon’s Rolling Western is a fun game to enjoy downloadable adventures on Nintendo 3DS. A simple story through Dillon, a curious cowboy in the form of armadillo. 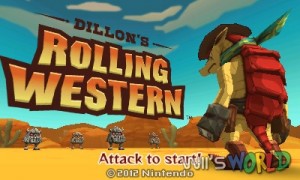 Tend the flock
The story introduces us to Dillon, who will be responsible for maintaining a certain order in the area and avoid the problems that can cause a “bad” very peculiar in herds that we have to defend.

From sunrise to sunset we will ride, as well armadillos move at full speed by mapping collecting materials and objects. Getting Herbs Manju makes us more members of the flock, which would translate into a greater life bar for the villa which we intend to defend.

Melee combat
We can stop the advance of the beings that haunt the flock with artillery towers, but in the end we will always have to resort to melee. We entered a quadrilateral in which we have to end with various monsters using the characteristics of armadillos: shoot, hit, dig…

The game also introduces some side quests that give us new skills.

The game, despite its simplicity, it is entertaining and, to be a downloadable, is not exempt from quality both at a graphical level as per the careful setting in scene. The scenarios and the characters keep an effective syntony that is certainly attractive.

Perhaps the story is at least worked. Its extreme simplicity will undertake to be a game geared toward children.

Previous: Silent Hill returns with the nightmares of Book of Memories
Next: Trine 2 improves performance in the new Nintendo Wii U