Elite Forces: Unit 77 is renewed for the new Nintendo DS

Elite Forces: Unit 77 is an action game and military strategy reedited to fit the enormous potential of the new Nintendo DS. 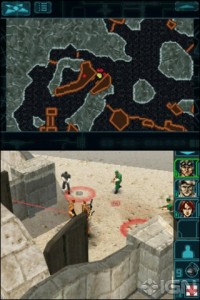 To the Rescue
The game’s story is simple: a terrorist group kidnaps different personalities and the government is forced to resort to the Elite Forces: Unit 77 for rescue. The specialized anti-terrorist group is formed by an expert in explosives, a master of the programming able to hack anything, a soldier with heavy weaponry and a sniper.

Each one will have a key role in the course of the game, so we’ll have to alternate their use in order to achieve the objectives, which are often reach a point, or destroy the Stage.

Some control problems
The game has some problems in controlling the characters, although we have Artificial Intelligence that controls our companions of the group and the machine itself provides us support in fighting. These control problems makes it difficult sometimes to dodge enemy projectiles and even creating kafkianas situations in the clashes, which produce movements that do not respond to any logic.

As all action games based on the military fighting, we have at our disposal different weapons and it will be necessary to find the ammunition needed to be able to use them.

What is well turned out is certainly more fun, multiplayer mode. Also noteworthy is the audiovisual aspect, with correct graphics and an aesthetic both the characters and the pretty good scenarios.