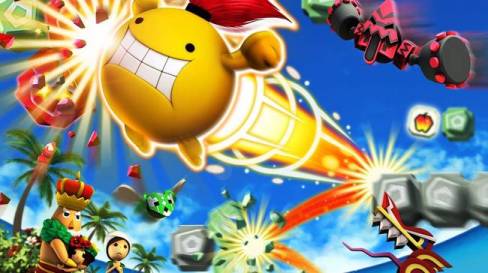 FlingSmash is a unique game that mixes puzzle, action and arcade developed by Artoon, a study chosen by Nintendo for the Wii though has never really been able to complete a full round production has succeeded in the difficult market for video games. 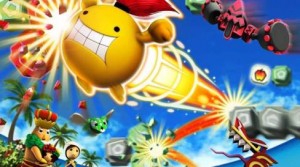 Zip, a protagonist in the shape of a ball
Our protagonist is an odd ball called Zip, whose objective will be to liberate the inhabitants of an island in a perverse curse that haunts them. The story is not anything special, and the mechanics of the game is to collect pearls and eliminating enemies, which will provide us add more points and climb in the rankings. The possibility of achieving points is high because we have over 30 stages and screens with various different elements that change.

The game takes us through different environments or worlds, and in each of them adopts new ways or capabilities.

To play FlingSmash we use a Wii MotionPlus or Wii Remote Plus, although after a while managing to Zip we will check that it wasn’t so bad.

Graphics and aesthetics
Graphic level there is no many innovations and aesthetics of characters and scenarios is rather sober, even poor, although colorful. Perhaps too childish as a whole. The sound elements are not to provide anything special merely be a proper accompaniment during the game.

It gives the feeling that as the proposal has been to half way, and will depend on the acceptance of the subsequent public better in the case of that occur to you new versions.

Previous: One Piece: fun pirates in search of the treasury
Next: Warp: A gamble