Football Up! Better to play in group

Football is undoubtedly one of the most popular sports video games, and carried, unsurprisingly, not everyone can do it successfully. This is the case of Football Up!, A game developed by two Spanish companies that have tried to create a football title with a simple gameplay, even too much, which places him a notch below others as complete as Football Manager. 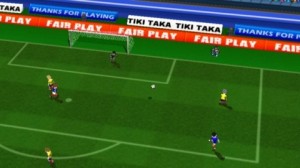 Adaptation period
Football Up! It is going to require time to adapt and begin to enjoy. It requires a lot of skill and potential of players and ball movement are vast. If we do not master this aspect, the issue will appear tedious, if we do, start to have fun.

The game includes classical selections of tactics, equipment, players, etc., but failure in what can be called typical of the game, i.e., the accompaniment that we do not control but that it needs to work for the game to be logical. An example: we would get out of band and the player who must receive abandons the waiting position of the ball without knowing the reason.

Best shared
As a family console, the Wii is perfect for sharing this game based on the soccer sport; it will always face someone more entertaining than the machine itself, especially if we suffer failures described above.

At a graphical and aesthetic level meets, not an innovation but we have not seen in other titles.

However, this is a title that will provide fun moments in group, although they have proved more technical simulators, will be left somewhat disappointed.