Fans of the series Harvest Moon can now enjoy the new release, Grand Bazaar, with the normal delay compared to other markets, such as Japan, which already could play for more than a year in the small console from Nintendo. 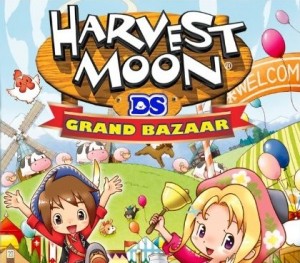 Some developments
So far we have seen that all Harvest Moon had a number of common elements that with the passage of time characterized the saga; the history, the evolution of the farm… In Grand Bazaar is broken with this tradition. The base remains the same: we come to a new city and Mayor offers a farm to stay and work it. From there, get the latest developments.

On the farm we have already constructed the corrals, prepared the land for cultivation and housing already equipped. We’ll have to start farming and raising animals to get money, but ignoring previous work that we did have in previous installments, which makes things much easier.

Sell on the market
It is in the market (bazaar) of the city where we will go to sell our products and we achieve the previous goals that we have set for trading.

The transformation of products on the farm get through the mills will also be important to give more value to our commercial offer.

Life on the farm continues to be marked by the different stations, which determine our work on it (plant growth, harvest time, etc).

Grand Bazaar is a video game that seems designed for a young audience in order to incorporate them into the series, rather than to satisfy those who had enjoyed their previous releases, maybe something will be disappointed.