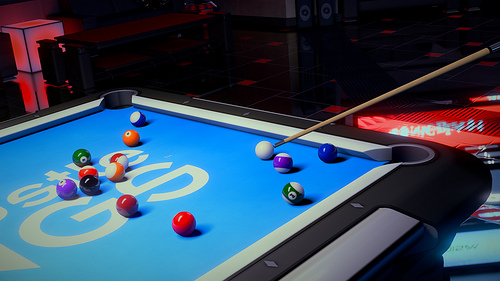 It is not an easy adaptation but Hustle Kings has achieved a game based on the billiard entertaining that will fulfill the expectations of the fans. The work of VooFoo Studios has been remarkable and although it is hard to replicate what we could be able to do with a taco the benefits of the PS Vita has been exploited to the maximum to provide us with great moments with this attractive game. 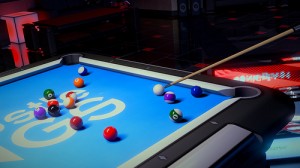 Simulator
Hustle Kings is basically a billiard simulator accessible to all players, regardless of how good or less good they are in a real pool table. Even those who have never played with a full tutorial will be guiding until they can go for alone. Almost everything can be done via the touch screen, but we can play combining controls.

The most important thing is hitting the ball, and the idea used is curious: drag to back a graph of the stick and throw it forcefully upwards, so that the virtual taco performs the movement. In fact more reminiscent of the function to spring shoot pinball, but calculate the strength, speed and direction in this manner is much more natural than pressing buttons.

There are three types of shot. The simplest is to indicate the power with the finger. The standard allows us to calculate the force and throw the shot, while the professional calculates all hit speed, power and precision.

Game Modes
Modes include race, where we play against artificial intelligence machine, tricks, time trials and a series of mini-games to tournament mode.

As in the real game, the most fun to be found in the online multiplayer, full of options to configure, betting points or got money, or simply playing for entertainment.

Previous: Aliens Colonial Marines: A shooter too predictable
Next: Primal Carnage, or survive to the dinosaurs