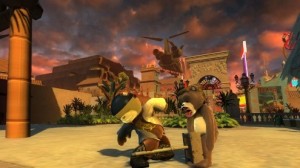 Lots of action
Panic in Paradise found in action from the beginning. A group of funny bears come to Paradise Island, a luxury resort for stuffed animals, not knowing that the bus travels smug. From there, bears will eliminate the constant game.

In Panic in Paradise important thing is the more ill be better. If we endeavor to bludgeon a bear to death, we will be bad, but if instead we let him death is much more violent, with more twisted methods, for the better.

For starters, the play is divided into areas and objectives. In each of them we have a bear to find and punish a particular way. We will also have some side missions as additional challenges that fulfilling them will give us more coins and experience points.

Overcoming levels
As for weapons, each level has an own, from knives to any type of blunt object. Achieving goals and collecting coins allow us to move up a level.

It will be necessary to propose strategies for meeting the targets, but the main thing is the combat, which is easy to implement technically.

The graphics are correct and the aesthetics of the original characters and scenarios and attractive. While it is true that there are better games in this genre, as the brilliant Mist of Pandaria, Panic in Paradise at least manages to be entertaining and original.