NBA 2K14: More realism for a basketball of high heights

That pleasure of being LeBron James for a moment. Enjoy leading the destinies of the best player in basketball on the planet. Feel like the God of the basket. Finally, 2K Sports gives us that opportunity with his new title ‘NBA2K14’, which besides incorporating first Euroleague teams allows us to get into the skin of the star of the Heat to carry the legend either with Miami t-shirt or with which we decide. 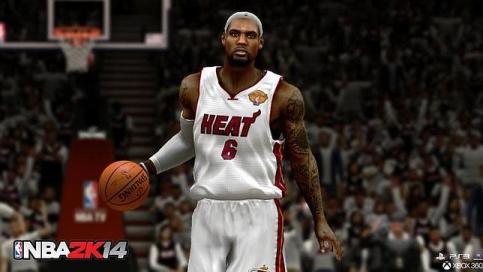 These two are the most important improvements of a classic video game; you will find your great revolution from next year, when its development on new platforms PlayStation 4 and Xbox One completely change the look and playability.

The version of this season is quite similar to the previous one, with the (very important for the followers of the saga in Europe) added novelty of having the best teams in the continent. Up to 14 European teams appear in 2k14.

As we said at the beginning, in addition to the player mode and equipment, which will allow the user to create an avatar in his image and likeness and sign for the same team at the stars you want, the possibility of becoming LeBron James and take him to overcome legend Michael Jordan has a very appetizing attraction for lovers of the basket.

The NBA 2K series has become, little by little, one of the best video game franchises in the sports genre, with a level of depth in very authentic controls and animations to capture the movement of the player with a great precision.

Narrated by Lebron himself and with the usual commentators, the game has gained in realism and control. This time has changed the way people react to the players; there is now a better attack and better balance between attack and defense. The controller has made some improvements to make more authentic shooting from the right ‘stick’ or perform brutal kill. And, as if that were not enough, with a spectacular soundtrack.