Basketball is one of the sports most commonly used in video games and there are a lot of level simulators like insurmountable NBA 2k13. However, Electronic Arts also occasionally presents titles that attempt to recreate the millimeter what happens on the basketball courts, but develops original games by incorporating surrealism. This is the case of NBA Jam. 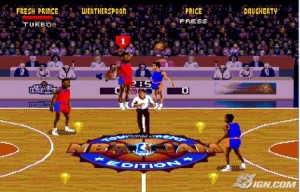 Matches 2 vs 2
The mechanism remains the same, games 2 vs 2 in the main stages and with great players in the NBA, where the rules of sportsmanship disappear and impossible mattes are a constant.

Aside from featuring a challenge mode, mechanics and gameplay is exactly the same as the original NBA. Those who have tasted NBA Streets just find incentives in this installment, which tries to exploit the popularity of sports games but without barely include notable developments.

Inventing moves
The interesting thing about this game is fun provided by the deal against another player and, with basketball as a pretext, invents crazy moves without regard to rules or physical laws.

A graphic and aesthetic level is well finished and it shows that this is one of the most reliable studies when developing sports games. However, the aesthetic too reminds titles such as Mortal Kombat, already ancient.

Before the proliferation of existing sport simulators today inventions as this NBA Jam are interesting for those seeking new experiences, but in the end are titles of shallowness.