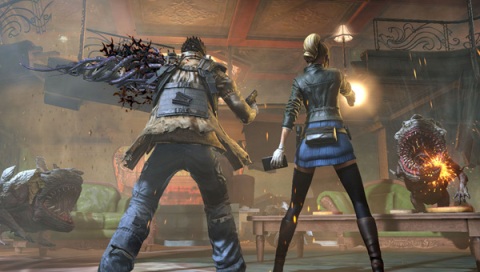 NeverDead is an action game for PlayStation 3 (also available on Xbox360) based in the immortality of the main character. Good artwork, attractive aesthetic but maybe something lame in regards to gameplay. 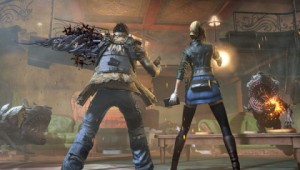 Immortal Mercenary
Bryce Boltzman is a mercenary hunting demons who enjoys (or suffers) of immortality. Our objective will be to combat demonic beings and in the battles, despite losing parts of his body, including head, can put everything together and continue its purpose.

The “grace” of the game is precisely the scandalous scenes where our hero loses parts of his body. But in turn comes a time that it suffers from repetitive. Combat, received blows, losing members, re-raise, keep fighting…

The fighting, at the beginning, is certainly entertained by the spectacle of the same. Virtually everything we hit onscreen, are demons or inert objects. But there comes a time when we invade a sense that we do not move, that nothing new happens with the passage of time. And unfortunately you will notice very soon.

The sound elements, at least, bring positive things. It is varied, original; appropriate to what is reflected in the display.

Lacking depth
NeverDead part of a good approach but lacks depth. Entertaining at the beginning, too soon falls in repetition, and therefore decreases the interest. It lacks some depth and would have been desirable to raise the level of demand as we go. A title untapped perhaps a little more work could have become much more attractive.

Previous: Gunman Clive: A simple action and platform game but fun
Next: Fractured Soul: Platforms and demanding action with elements of the classic arcade