Papo & Yo: A game with social message

Papo & Yo and is an original game, curious, fiction based on reality: the imagination of a child as a defense mechanism to the problems surrounding you. Interesting. 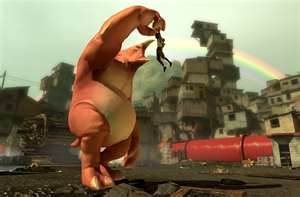 Quico and imagination
The story introduces us to Quico, a normal child who, in principle, gets along well with his father until he abuses alcohol and transformed into a violent person. From there, the cupboard, where Quico hides, is full of surprises.

In the closet is a peculiar Quico and imaginary friend, Papo, a friendly monster to eating frogs, it becomes violent. In those moments, you have to get away from him. Find the shaman who can return to its quiet will be the challenge of Quico.

We will make progress by a series of puzzles and face different challenges and wandering around the city in search of the shaman.

Simple game
The mechanics of the game is quite simple. The difficulties are just as much part of the story, but sometimes we find some surprises.

The aesthetics of both scenarios as the characters is simple, adapted to the world in which the role lies in the imagination of a child.

The playable appearance is not what most will remember from this title, and although probably not the most popular in the bestseller lists, it is to assess the long shot by facing a complicated subject, alcoholism, adapted to a game for Play Station which is primarily based on a child audience.