Primal Carnage, or survive to the dinosaurs

Primal Carnage is an action game with shooter characteristic elements that recalls in its aesthetic and approach to one of the most successful film franchises of the last decade, such as Jurassic Park, which is already working on its fourth part. 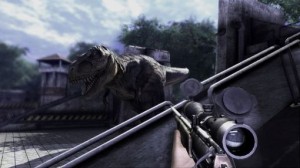 Risky Bet
The game does not offer a traditional bet to get points, improve rankings, etc. The games begin and end and no data is saved. Playing for the pleasure of playing, perhaps something risked since many players find precisely in his aptitude to improve the real motive for keeping on enjoying repeatedly the same game.

The team approach is simple. A group handles humans and other dinosaurs. None has advantages over the other; the forces are balanced and will be the know-how of the player which will tilt the balance of one side or the other.

If we play with the humans, the camera is in first person and the action is based on the use of weapons and abilities of each character to take out enemies as dinosaurs. If we choose to play the latter, the camera is in third person and tries to enforce the strength or ability of the animal (flying, jumping, running …) to destroy the human survivors.

Audiovisual
In spite of the fact that there are only five maps, these have a very accomplished ambience and offer various styles of play. The visual aspect of the game is quite successful, with a recreation of the characters and scenarios quite attractive. The sound, inconsequential.

The initial approach is fun but after a few hours of play everything falls into an unwarranted repetition which leads to boredom.