Rainbow Moon is a classic RPG with a major handicap part, is that those who are not fluent in the language of Shakespeare will have some difficulty in getting the most performance. Luckily, the RPG fans are already accustomed to that many games arrive exclusively in English, and this title, although it is not at the level of Chrono Cross, it has a certain interest and turns out to be entertaining. 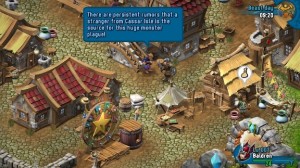 Baldren
This time the protagonist is Baldren, a young man of strong character who wanders the world trying to catch his nemesis. Rainbow Moon is full of monsters that have destroyed the tranquility of the place and of course they will have to face.

The story is quite simple and perhaps the game suffers from lack of depth in the characters. Sometimes are very flat, extremely predictable.

The mechanics of Rainbow Moon is divided into two camps: those related to the exploration and those that directly involve combat.

As we walk along the towns and cities we discovered a series of missions, both major and minor, that have to be overcome to unravel the secret behind the invasion of monsters that suffers from Rainbow Moon.

Over 50 hours of gameplay
The game is developing the classic mode, i.e. by shifts. We’ll have to go driving the characters deftly and strategically to achieve the objectives. In Campaign mode we can enjoy around 50 hours of game play.

In short this is a simple RPG, entertaining, but far from the major titles in the genre. In any case, recommended because little else can offer so be paid for this downloadable for Play Station, around 20 euros.