Year after year we are always waiting to be surprised by each new title of Pro Evolution Soccer, always we have hope to feel nostalgia for ancient times, that the golden age of the series on the PlayStation 2, when the franchise reigned in the genre football. The good news is that much of this feeling can be felt with Pro Evolution Soccer 2016, new game in the franchise that finally has the ability to again go toe to toe with its rival, FIFA. 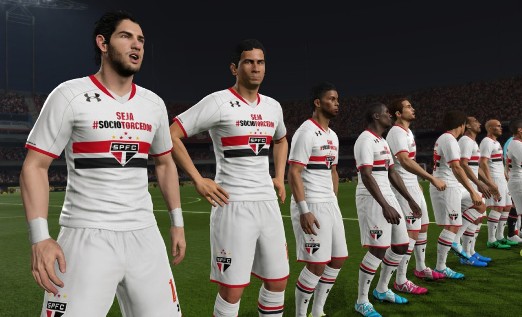 The first thing to notice when playing the new version of football Simulator from Konami is clearly the animations of the players, who now have more fluidity in the movements, giving an incredible sense of realism when playing. Including, it is worth noting the realism in animation of the most famous players, such as the player of the Netherlands, Robben. It is easy to see the player even if his appearance was different, thanks to the realism and fidelity to their movements in real life. According to Konami, PES 2016 has three times more animations than its predecessor.

But nothing good would have more animations and realism if artificial intelligence wasn’t so well crafted, quite possibly the best of the series. Players on your team who are not with the ball move perfectly occupying the empty spaces of the field, creating opportunities to advance or to surprise the opponent. Not only in the attack it is possible to notice this intelligence, but at every position on the field. Side, defenders, the midfield players and even goalkeepers, all are positioned in order to help the team. However it is realized that sometimes the proponents ignore the ball crosses underneath the opponent, causing extremely dangerous attacks.

This time, the gameplay looks more truncated, what should the new collision system. More opponents take the ball through stronger attacks. Despite that fact, the flow of the game is not so affected, nor is there an excess of faults. The whole game feels great, it seems that all elements marry well, recalling the old games where a meeting with friends to play Winning Eleven was fun guarantee. The look on the Fox Engine is beautiful, with good lighting, textures and weather effects, but some players’ expressions in animations often seem unnatural.

One of the main modes of the franchise, the Master League now has a redesigned look that is more objective and simple, showing essential information without having to open a menu. The order also includes elements that make the game faster to play, such as a scout that helps you find new skilled players based on the weaknesses of your team. That turns in less time going through menus and through more time in play. Already MyClub mode, response to FIFA Ultimate Team, is promising but still not as attractive, with loading and confusing interface.

The online games are a pleasure to play, mainly due to the fantastic netcode, where did not realize practically anything of lag. This fact is extremely important for a game of this genre. A point that still bothers and that is present in every new title always is the lack of licenses of great teams. As a supporter of Manchester United, it’s daunting to make a great classic that should be against Chelsea, but actually is with a generic name team called London FC.

Despite this problem, Konami added an extremely useful functionality to the PlayStation version of the game, allowing the player to use files created by the own fans, who update complete uniforms and even the appearance of players.