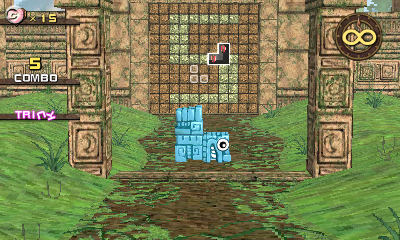 SpeedThru: Potzol’s Puzzle is a fun puzzle game for the Nintendo 3DS in which you have to think fast and act. Find various challenges that will test our mental agility. 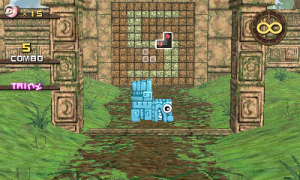 Three-Dimensional Figures
The game is based on the three-dimensional shapes that have to be placed in a finite time playing against us, so the speed of execution of the actions will be critical. The proposal is simple, even there are other games that already previously used the same formula, but well-executed is always very addictive for the player, especially when the difficulty level is increasing and becomes a personal challenge to beat the machine by adding more and more points.

To the difficulties inherent to go out and locate the figures are added certain elements that from time to time appear on the screen, and that act in the form of traps that we must avoid.

Complex challenges
What makes this game so attractive in a genre in which everything seems to be already invented is its ability to surprise with increasingly complex challenges and developed.

SpeedThru: Potzol’s Puzzle allows us to enjoy the action together with another player through the local network in two different modes, or dealing with a heads-up duel against another player on the same console, using each end of the laptop to shared control mode.

At a graphical level the game exploits to perfection the possibilities of the 3D effect that gives the small Nintendo console. The accompanying sound is also very attractive, and helps maintain tension during the course of the game.