During the last E3 video game trade show we attend the launch of the new character title of the company’s flagship with Super Mario 3D World for Wii U, with very colorful designs and in line with what we’ve seen so far in the games Mario. 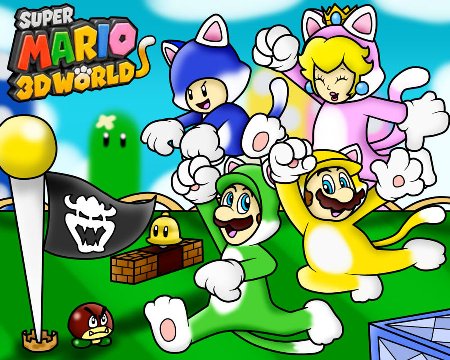 Meet Super Mario 3D World for Wii U
While it is true that Nintendo fans waiting a new Mario title, a classic for all Nintendo consoles without which the company would not be the same, should also be noted that Super Mario 3D World gives the feel of a game that we have seen. Far from picking a more impressive launch and close to Super Mario Galaxy, Nintendo announced this multiplayer platform, with the possibility of up to four people simultaneously involved.

One of the most striking developments of this game is the new Mario costumes, which in this case becomes a cat and acquire new skills and climb the walls or use weapons against the enemy cats. Although this novelty does not seem appealing to them that everything should, the multiplayer mode is an incentive for you to play with friends or with your family, managing to Mario, Luigi, Toad and Peach, each with different skills when playing and the speed of Toad or Luigi ability to jump higher than the other characters.

Entry to the market
Although this probably isn’t the game to carry the dubious buyers of Wii or to be made with the console as if you can do, for example, Super Smash Bros, come on the market during the month of December, coinciding with Christmas. It does not promise to be one of the great games featuring Mario, but if you moments of entertainment and even a multiplayer game with which to share good times, it is a good choice.