The Tetris is one of the most popular titles in the history of video games used in all possible platforms. Simple but very addictive, marked a turning point at a time, late 80’s, where the fever for the game began to spread. 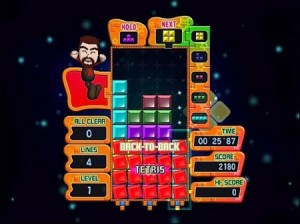 This game, designed by Alexey Pajitnov, has had countless adaptations and versions, and Tetris Party Deluxe for Wii is one of them. Respect the synthesis of the game, great things do not change, but brings new game modes to keep alive the spirit of Tetris, almost 30 years after its first release.

New game modes
One of the new single player modes is called escalation, which is used by the various geometric parts with the purpose to build a ladder by which a funny character controlled by the machine may climb to the top of the screen. We also found another called Shadow in which we must complete a figure that has been proposed to us by placing each piece in its exact location.

The same applies to the modalities of Bombliss, where a few blocks pump alter the routine of game or Stage Racer that invites to guide a small part taking advantage of the free spaces of the scenarios.

Multiplayer
Also remain as entertaining multiplayer options in this type of game, which allows us to measure our skills against other players, increasing the adrenaline and increasing interest.

There is little news of interest to graphic and technical level. Again, sound effects, very traditional. But these are not the most important reasons in a title that always pleases by how entertaining it is and how easy it is to play.