The Night of the Rabbit: Magic and spells to solve puzzles

The Night of the Rabbit is an adventure game starring a boy who wants to be a magician. Now let’s find fantasy-adventure starring a child who pursues goals that seem impossible. 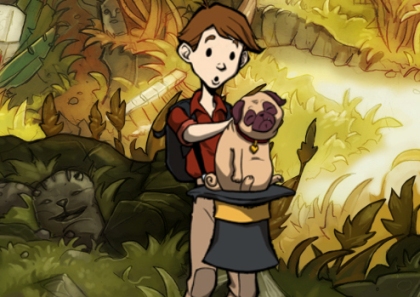 Jerry Hazel
The protagonist is named Jerry Hazel that of overnight just became the apprentice of a powerful wizard-like rabbit. To counting the hours that left him to return to school after the summer holidays happen to fight to save the world become a real magician and will have to prove its worth protecting the inhabitants and the rest of worlds that make up this universe of fantasy of a terrible evil that threatens to destroy everything.

During the game we will have to solve puzzles to progress toward our ultimate goal. Some are complex although most are overcome with ease.

Jerry Hazel, besides his intelligence to solve the problems, can use magical spells when not find another alternative to move forward.

The storyline of the game is gaining in intensity and difficulty to move after a start perhaps too bland and simple.

Audiovisual
The game is available on PC and Mac although soon reach to the PlayStation 3 from Sony and the Xbox 360.

To level the audiovisual title meets expectations. The beauty and shine of the scenarios is one of its strengths. The recreation of the scenes and characters has been very careful.

Without doubt, it is a game that can have more travel that in upcoming releases win in dynamism.