Transformers Fall of Cybertron: A classic battle that entertains

Transformers Fall of Cybertron is a PC game of fun and action based on the fighting in transformable robots so popular in the Japanese television series a few years ago. Those who remember them, because they are older, enjoy this title, and no, that is, the youngest, at least find a proper game, well done and entertaining. 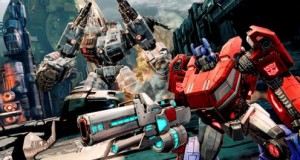 Simple gameplay
The Fall of Cybertron mechanics is not complicated. Shoot the enemies, avoid being destroyed and go beyond levels and difficulties. Perhaps the simplicity principle is excessive, but gradually we will encounter challenges increasingly difficult to overcome and that require maximum concentration.

We must be careful not to lose the ammunition with which we have. Many times you can be winning points against the enemy without emptying our arsenal. We have to be skilled, intuitive and conveniently use the features of our robotic machines.

Correct Audiovisual
At a graphical level the game is well resolved although it does not give us what we have not seen before in similar titles. The aesthetic is nice, because the Japanese are aware of this and not only to make games manga. Simple sound effects and appropriate, without more.

The best thing is that each level looks like a game in itself and the sum of all it achieve a good result. This prevents the tiredness that generates some games excessively repetitive in the mechanics of combat.